First time hearing an owl hoot, not from barn,
but an old tree I'd fashioned into fort.  Full moon offered light,
so I tiptoed forward, (left Willow's safe embrace) leaned over fence...
a flash of white, whir of wings sent my heart fluttering,
feet scampering back to bed; head between pillow and mattress.

This is linked with "The Sunday Muse - Wednesday Muse - Night Sounds"
Posted by Margaret at 10:56 PM No comments:

Perhaps it's the birdsong winding down as the cricket's chorus begins,
occasional shadow passing overhead (realize it's bat, not swallow), back deck, screenless,
mountain breeze soothing, book in my lap as if the effort to hold aloft is too much...

Awakened by muffled bark of a neighbor's dog, mine at my feet, his rumbling
a feeble attempt at a warning (he's as somnolent as I); invite him beneath cotton-worn quilt,
our cozy haven as darkness tucks us in and Mother's voice resumes.

This is linked with "Imaginary Garden with Real Toads - Weekend Mini-Challenge - Let Evening Come".  Seriously, this happened just the other night ... I was hard-pressed to make it to my bed.  I think we will soon have the lower back deck screened and I will spend nights on a true, southern summer porch.  Below, I invite you to listen to me read my poem. 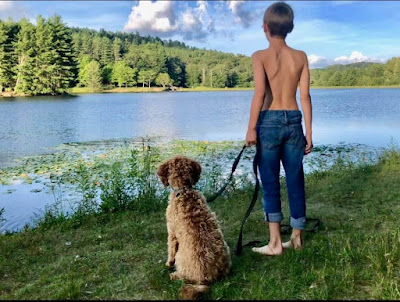 I trace his spine with my finger,
along elastic-waisted pants threatening to slide past slim hips,
trace up spindly arms, over narrow shoulders to the back of his neck.
Smile as I flick my finger over wayward hair frolicking with lake's breeze,
Blue by his side, the pair silent; a rare occurrence for this boisterous pair.

This photograph, a treasury of feelings; of a young mother not comprehending
how quickly her sons would grow, daughters outgrow dolls,
how soon her mother's hand would be empty;
and the family dog, age, not able to keep up with his kids.

Shrouded in memories, I want to tell her not to waste a moment,
immerse herself in each day, laugh, play, hug them 1000 times,
10,000 times.  Soak in still moments; dishes and laundry can wait.

My mother's heart wishing I could do it all over again,
knowing what I know now.

This is linked with "Imaginary Garden with Real Toads - Sanaa's Challenge - I Like for You to be Still".  Use the reference to Naruda's title in a poem.
Posted by Margaret at 9:24 PM 9 comments:

Email ThisBlogThis!Share to TwitterShare to FacebookShare to Pinterest
Labels: children, If I could do it all over again, Imaginary Garden with Real Toads - Sanaa's Challenge, Motherhood

I usually sleep in fits, short bursts with no rem.  But last night was different; I dreamt I was the moon's fairy, come to earth upon a shooting star slashing its way through purple midnight.  I tiptoed upon woven linen sheets, my eyes twinkling like celestial skies.  You briefly awakened, thought me a firefly, returned to slumber.  I gathered you up, rode a moonbeam back, safely placed you within the protective curve of the slivered orb.

Our "sky house".  The one of countless stories dreamt up, of Crayola images forever sweet, created as we gazed through curtains floating upon a mountain's summer breeze.

Why can't dreams last forever, why must I wake to hear your breathing labored, your cheeks pale, smile fading?  I gather you in my arms, like in the dream,  Begin to pray.  To God... with an aside to the Moon Fairy.

I can be charmingly coquettish
to win admiration and affection
so you'll treat me like a queen.

And when in repose, I stretch,
soft paw touches your arm,
I could just as easily scratch you,

take your hand between my teeth,
tear it to shreds (why do you think
Fido's so afraid?),

and my blink you see as love,
not a hiding of the feral tiger
that resides inside.

Email ThisBlogThis!Share to TwitterShare to FacebookShare to Pinterest
Labels: Cat, The Sunday Muse

He'd sit amidst the apples in my Radio Flyer,

Shyness forgotten as I'd laugh out loud,
race down country hills, me imitating Red Hawks,
arms outstretched, he an Irish-Setter (no need for pretend). 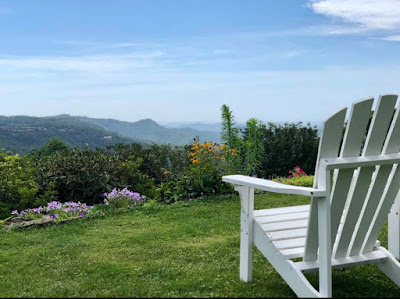 "If you are faced with a mountain, you have several options.  You can climb it and cross to the other side.  You can go around it.  You can dig under it.  You can fly over it.  You can blow it up.  You can ignore it and pretend it's not there.  You can turn around and go back the way you came.  Or you can stay on the mountain and make it your home"  Vera Nazarian

I nestle myself in the bosom of the Blue Ridge, nourished, nurtured, allow my heart to languish within her embrace, her lullabies absorbed, my eyes refreshed.  Deep breathes, feet bare, a settling of the spirit, which only Mother can soothe.  Coneflowers grace my view whose colors are starting to fade, petals beginning to droop.  Reminds me strength and healing are cycles of renewal and rebirth; what home is all about.

This is linked with "Imaginary Garden with Real Toads - Toni's Challenge - Poetry Puts a Lump in Your Throat"  Find a Quote and write a poem that reflects the sentiment.  No more than 24 lines.

The photos are not from my backyard, but from where I get my hair done (Westglow Spa).  I wish this was my everyday view, but I am satisfied with where we live and our quaint view of the mountains and trees.   I am minutes from views similar to this all day long. 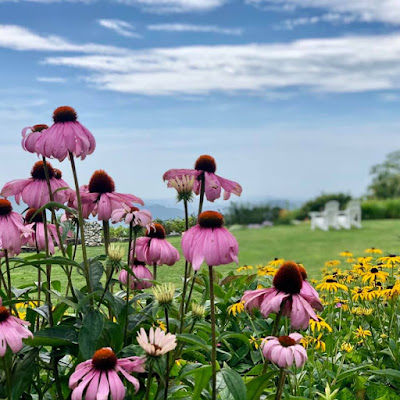 This for "The Sunday Muse - Wednesday Muse - The American Sentence"  A poem invented by Allen Ginsburg with 17 syllables.

The photo is Westglow Spa - a place I get my hair done (not this building -  This is a resort, a restaurant, a wedding venue; the historic summer home of the painter Elliott Daingerfield.)  One of my favorite paintings of his is "Sunlight in the Forest" below.

And an article about the two women who own this place - on many boards and are strong voices in the war against sex trafficking:  HERE 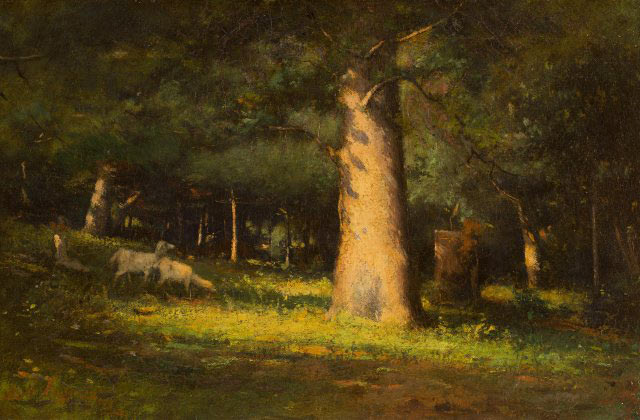 The college boys considered it a road-side treasure,
excitedly hauled the orphan home, lugged it up
worn steps and placed it (for the next three years),
none too gently on the slant-floored, over-sized stoop
mostly out of reach of rain, snow, sleet, and hail.

If not an antique, it was certainly "aged";
not a worthy investment with one leg missing,
but nothing a cinder block couldn't cure.
It's suede-like fabric boasted a distant connection
to fashion, but one had to squint to notice.

But free was a different story,
and the boys felt they'd rescued it from its beggard fate,
and many an evening and starry night were spent
playing cards, laughing, and attempting to woo a girl or two.

Napoleon Street was not as grand as its namesake,
nor did neighbors complain of the addition
as they had similar settees gracing similar porches.

Mid-day one might find clothes-lines sagging
with undergarments; I particularly was charmed
by the occasional quilt drying in a shaded oasis,
as if sunlight might damage faded and worn fabric.

Come evening, hellos and good-days emanated
from beneath these covered respits,
glasses raised, even the teetotalers joined in,
swigged down refreshing toasts on hot summer days.

Must confess I was never tempted to rest
upon the golden "velvet" couch, but was sad,
upon graduation, when I watched it hauled off
to another college porch, the boys insisting its presence
was a "legacy" to be upheld.

linked with "The Sunday Muse - #64" and "The Imaginary Garden with Real Toads - The Tuesday Platform".

I invite you to listen to me read my poem: 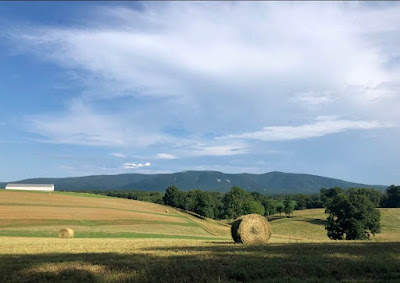 Summer morning has slipped her hold on the sun
and mist has long since joined the waterscape sky
beneath which sloping shadows have started to stretch
and amber haystacks, freshly rolled, shimmer as refined trinkets before me.

I half expect to see Monet, hat tilted, before an easel flourishing with stabs
and strokes of his brush, silhouetted not before his beloved Giverny,
but my mountains shrouded in violets and smokey blues.

Indulgently open my sketchbook, try capturing the mythic greens before me,
admire flutter-byes of butterflies, songbirds, and hawks;
embelish with artful twists of sweet lavender, ancestral golds, and blissful blues;

a midday serenade, an ode unsung, lovingly stroked and shaped
in the open air, time and movement captured with broken color,
my hat removed, sun upon my face, and I trust, Claude over my shoulder.

will it taste of raspberry creme,
flow from rose-tinted lips whispering sonnets?

If purple, will it be tart like a Saskatoon berry,
scented like frosted lilac or a wisteria tree in full bloom?

Cool and refreshing as a coral reef, sweet as peach preserves,
or free and determined as wild salmon?

Smooth as bourbon butterscotch, refined as amber,
exciting as a piece of eight?

Cloaked with comfort like morning fog,
a rich Highland or Somerset grey?
(think Scots or Englishman - I’m all about an accent)

Maybe Celtic and Parisian green (see above)
or calming as meadow sage and wheatgrass?

Perhaps red - hot kisses beneath scarlet maples
or beside gooseberries on a woodland path?

If passion is pink, is it as delicate
as a Victorian rose?

What color will you choose
as you nibble upon your lover's ear?

This is linked with "Imaginary Garden With Real Toads - Bits of Inspiration - You Write the Color"
Posted by Margaret at 12:13 PM 9 comments:

Perhaps it isn't an angel that rests
upon each shoulder offering virtue and vice,
but Falcons, white and black,

one of day, the other night
One teases temptation,
the other promises redemption;

both have talons tapping my flesh
demanding I choose between the two.
Undecided, I pluck feathers from each,

rather, sung about.  Swanee River,
2000, crooned within Carnegie Hall
and I seated in front row shared her 78th year

celebrating her happy wasn't found
in a bottle of pills, but in her voice,
triumphant and smooth.  Her joy went to our heads

and we gave it right back as she sang songs
from her heart to ours and we held on tightly
through all three curtain calls.

Linked with "Imaginary Garden with Real Toads - Out of Standard - This is the End?"  Marching orders were to create a poem that rewrites an ending that let you down... Give us the ending you would have wanted.