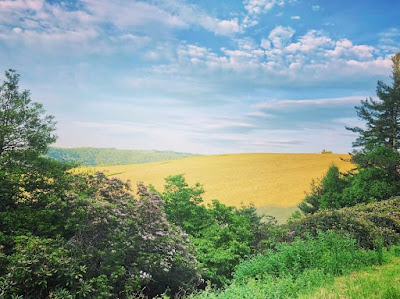 Raven wings smudge golden breast of harvested mountain field,
glide across her, caressingly (as I gaze up at shapeshifting clouds).

whose berries will burst beneath September skies;
red blooms akin to an irresistible kiss (it's impossible to think so far ahead),

for now is right as rain and scarlet maples are bursting tranquil vibes,
their shade Heaven-sent (as I settle beneath),

promise I'll return to chase the moonlight, try and quench
this obsession; sip from nectar that is spring.

This is linked with the challenge I am hosting over at "Imaginary Garden with Real Toads - Artistic Interpretations - Color it"  Use five words from the Sherwin Willimas "Fan Deck".  I used 13.

Also wanted to share with you the beauty that is a Rowan Tree (we call it the American Mountain Ash or the American Rowan Tree).  I will be on the lookout for it here in September...  (cursor down to see the red berries)  https://www.carolinanature.com/trees/soam.html
Posted by Margaret at 9:09 PM 10 comments:

Summer began with a burst of freedom so strong
we outran barn swallows swooping before us
as we passed through backyard, past barn,
past railroad tracks, into cornfields
and certainly old Indian trails,
bare feet still tender,
unlike calloused soles at summer's end.

Upon ponies we discovered the old quarry,
its circular descent a bit terrifying,
grateful when we reached the bottom,
boys' names and choice swear words
ricocheting off steep rocky walls.

I believe it was the little wooded area,
just past the pigs and cows (and cute farm boy)
where my lower legs brushed poison ivy,
my pony nibbled grass, me unaware
of the torturous days ahead.

Rapscallion days were interrupted
only by the annual family vacation;
I envied those who went to dude ranches,
lakeside resorts, Florida...

Mine featured an old Ford Station Wagon
packed with camping gear, dog, coolers,
and kids in the third, rear-facing seat,
(no seat belts) with windows rolled down.

Dad stopped for (timed) potty breaks
and vomiting dog, drove until dusk,
set up camp and off before sunrise.
(No lakeside dip, no playground,
no campfire s' mores)

until we reached our destination.
One year it was the Grand Canyon;
believe we stayed long enough to pose
for a family photo before promptly heading back
as I remember nothing else.

July became a bit of a blur, but I remember
one precious day as I ran down gravel driveway
to collect mail.  Heard a meow,
scooped up a baby kitten, soon to be named Casper,
my dear middle and high school confidant.

What signaled summer's end
were the new school clothes Mom had sewn;
sister and I pined for fashions
from JCPenny and Montgomery Ward catalog
(even Sears was preferable).

and when Mom trimmed our bangs in the kitchen
(once she really did use a bowl).

How could summer have come to an end,
when crickets still chirped and the night sky
was filled with bright stars?  When Backgammon
and Crazy Eights suddenly sounded fun again?

I always wanted to Peter Pan out my bedroom window
the night before school bus stopped in front of our hayfield,
the second cutting already stacked and stored
next to the horse barn for the winter,

our feet dragging early the next morning,
almost tripping over stubbled ground,
our stiff new shoes marching us out of summer and into fall.

and a Whiskey shot, no chaser
with today's headlines; find the burn
a necessary means for survival.

This is linked with "Imaginary Garden with Real Toads - Weekend Mini Challenge - Oh the (Poetic) Irony".  I REALLY may be headed toward this... !
Posted by Margaret at 1:07 AM 10 comments:

I planted eyes and a crown beneath the dirt,
watched as rain fell and suns rose and set.
Waited seasons for blooms
promising romance and fortuity
(for that's what the seed packet said).

Fragrant flowers eventually flaunted paper-like foliage
of strawberry cremes, pastels, Julia Rose;
and once upon a summer, my own Paeon arrived,
planted a kiss upon my lips, flushed my cheeks
all shades of peony pink.

Happily-ever-after sprouts peony buds
beneath my mountain's golden crown;
my love's hands calloused,  mine dirt-stained
awaiting rain, sunsets, and blooms
and lips that still like to be kissed.

This is linked with "The Sunday Muse - Wednesday Muse #8 Garden Spot" and a nod to Shay & Sherry for the "I planted" idea.  "Eyes and crown" are a part of the peony bulb plant... and romance and good fortune are some of the things peony's symbolize...

A glimpse of my floral gardens... 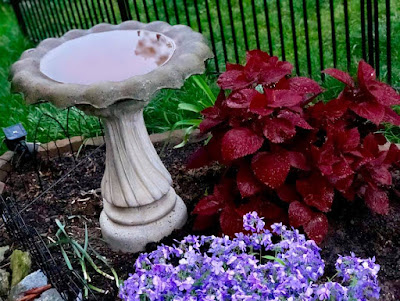 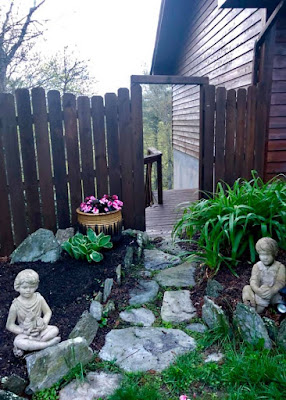 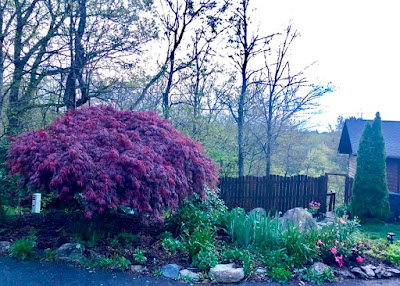 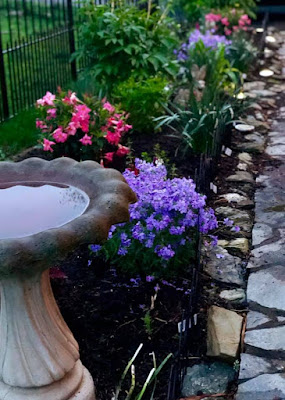 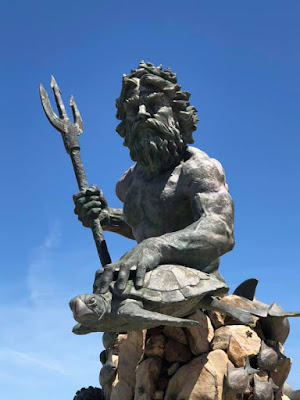 Finds Neptune, of pecs and sweltering gaze,
and me between heated sun and sand,
he with trident and I with pina colada in hand.
Painted toes I've to flaunt (painted pearly blue
to match the sky).  Wispy white bikini ...

not this May day;

alas not hours, days, or months,
but many years apart.  Piece of mind secured
with black, strapped and flowing.


and "Imaginary Garden with Real Toads - Just One Word - Apart"

This was written while I was enjoying the May sunshine on Virginia Beach a few days ago - it was nice but I do prefer a smaller, less touristy place.
Posted by Margaret at 7:23 PM 8 comments:

Red saturates, stains, attracts attention
desirable or not.  Confuses a man
who can't distinguish the difference
between rose, scarlet, claret, and crimson.

I wore red the night we met;
you may not remember where or when,
but recall the outfit, and so you say,
my smile.

Valentine's Day you still buy me
roses red and wink as I stain your lips
with my kiss; declare boldly, no confusion,
your attention's desired.

Today is our 29th Wedding Anniversary.

If you adore this tarrot card, here are more done by the amazing Kerry OConnor "This Rough Magic"
Posted by Margaret at 7:12 PM 6 comments: 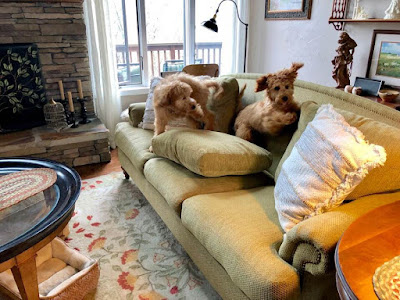 held my babies as they sipped bottles,
learned to read, watched way too much Disney,
held an old, aging dog;

New pillows at each end,
a face-lift of sorts,
run my hand over faded fabric

and bump where son dripped Gorilla Glue,
(I've still not recovered from that)
grant timeworn a bit more life.