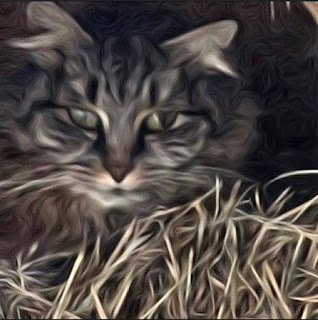 She rests in the hush,
watches as summersaulting remnants
of last fall's brilliance sweep with crumbling footprints
the swirling dirt floor.

Comfort to me always smells
of Bluegrass, Timothy, or Rye
upon which she nestles and listens
to wind's whispered warning.

Crows add cries of caution;
what rankles them today, who knows,
and pony raises his head from a pile of hay;
hears it all.  Understands far more than I.

The weekend's chore list waves "get busy"
but summer's fan spins as if to say
"It's time to play, to enjoy this day
as winter's storm is on its way!"

And so we head out, pony and I,
nod to feline as we pass.
We'll be back before the rains descend,
stall doors latched, secured,

but for now the rafters creak
and the latches bang,
offer up barns symphony of joy -
or lament; either way, I'm glad I listened.

I have been inspired by Maria Wolf of Full Moon Fiber Art to record "Visual Poems".  Which would lead one to think a video recording - of course I have to add a photo and a poem so I probably defeat the purpose!  I need to remember to turn my iPhone horizontally for a better image AND the "choreography" needs to be improved - I think it is a learned process.

You're invited to Listen:  https://soundcloud.com/margaretbednar/beyond-the-hush

* Note - not really rye as it isn't good hay for horses - but it sounded better than alfalfa :)

This is linked with "Imaginary Garden with Real Toad's - Natures Wonders - explore the world of footprints"  I stretched the meaning a bit I think... leaves are not animal tracks ...

My son, William Bednar "In Winter" a poem

"In Winter"
by William Bednar

The sweetest love
Is love that’s innocent,
And you have always known
The child in me
And loved these paws,
My soft, symphoric hands,
That love the miles
Of snowfall in your eyes.
Tomorrow will renew today
And herald in our holly-tide,
Will charm December, wake
The sleeping World into parity,
And revel with
The sudden solstice
Of our hearts.
In love, I learn the truth
Of the unlearned soul;
Each moment is a dance,
Each hour is mint
And cinnamon and snow,
Each kiss is fresh
When months are cold,
Each minute new
When days are short,
And when my love
Is worn by you.
Posted by Margaret at 12:21 PM 4 comments: 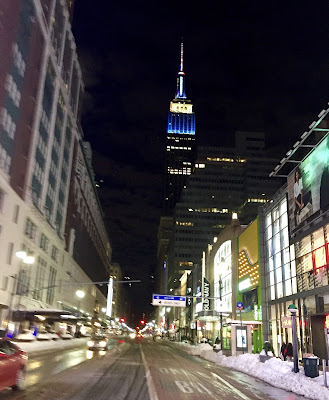 Surrounded as it is
by Tudor, Gramercy, Chelsea, and Hell,

this beacon of white,
within the city of eternal light,

proudly poses
upon a stubborn slip of land,

proclaiming for its nation:
Freedom!

You're invited to Listen:  https://soundcloud.com/margaret-elizabeth-bednar/empire-state-building

The Empire State Building often changes its signature white for various colors for different occasions and organizations throughout the year.

This is linked with "Imaginary Garden with Real Toads - Micro Poetry" - "One this snowflake (alighting) is upon a gravestone" e.e. cummings.   Well, there IS only one Empire State Bldg... and I chose a free verse style.  (no surprise there)
Posted by Margaret at 11:30 PM 18 comments: 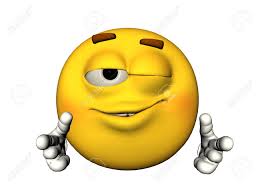 Delight in his quick wit, repetitive hair flip,
caressing hand down your back.


This if for "Imaginary Garden with Real Toads - Sunday Mini Challenge - Carpe Jugulum" using Terry Pratchett's "Carpe Jugulum" "Don't trust the cannibal just 'cos he's using' a knife or fork!" as a foundation.

I think most of us at one time or another have fallen for such a guy/gal... if not, my hat's off to you.

Click on the above link to find poets who have done a far better job with this challenge than my quick attempt.
Posted by Margaret at 9:26 PM 6 comments: 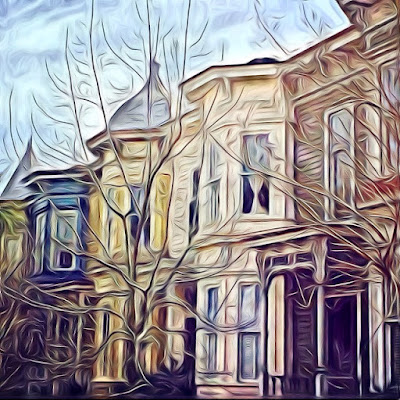 So much depends
upon paint color.

At the end of each day,
when you stroll toward home,

wave.  Kiss you just inside
our Raspberry Truffle door

lead you by the hand
to our back porch swing

hanging between Windham Cream pillars.
Ask you about your day.

At night, black shutters
will frame the Tiffany night light.

Now Dear, do you have any thoughts
as to paint color?

I Invite you to Listen:    https://soundcloud.com/margaretbednar/a-womans-touch-1

This is for "Imaginary Garden with Real Toads - Fireblossom Friday - The Red Wheelbarrow"  We had to begin our poem with "So much depends upon" - the famous poem written by William Carlos Williams.

Beneath bare branched poplars and beech
a pendulous beauty blooms early this year.

You are invited to listen:  https://soundcloud.com/margaretbednar/komorebi

This is for Imaginary Garden with Real Toads - Flash 55 Plus (use a foreign word) - mine is "Komorebi" which is Japanese for "sunlight that filters through the leaves of trees".