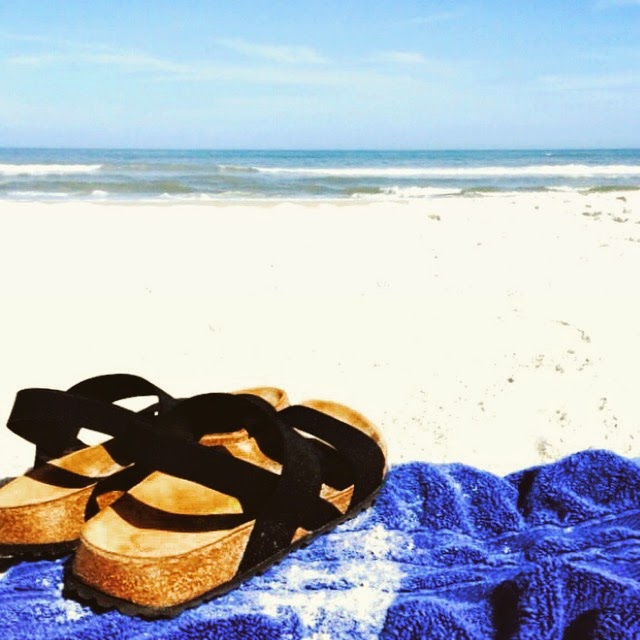 I am taking another blogger break...  Spring is here and I am going to enjoy it for a few days.  I wish you a blessed Easter.
Posted by Margaret at 6:49 PM 1 comment: 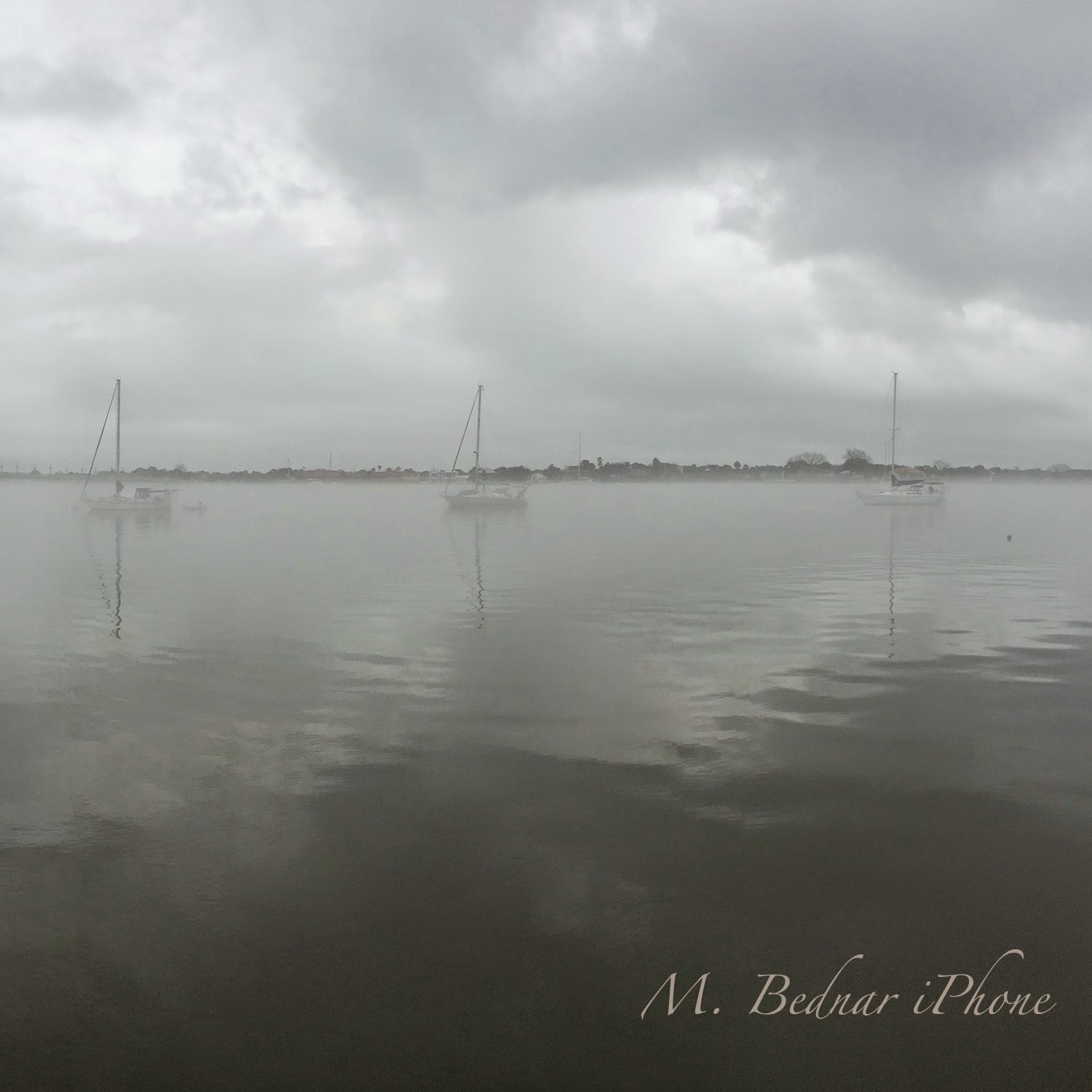 slash vertical strokes for the masts,
horizontal brush for skyline and waves,
find myself framed within a muted Cezanne.

How would he paint me?
Dreamily distant, stoically serious,
or a temptress beside river's edge?

This is for "Imaginary Garden with Real Toads - Tuesday Platform."  I wrote this in ten minutes, trying to just respond to the image I took early one morning while in St. Augustine, FL.   Not sure if this is a completed poem or one that is "in the works". 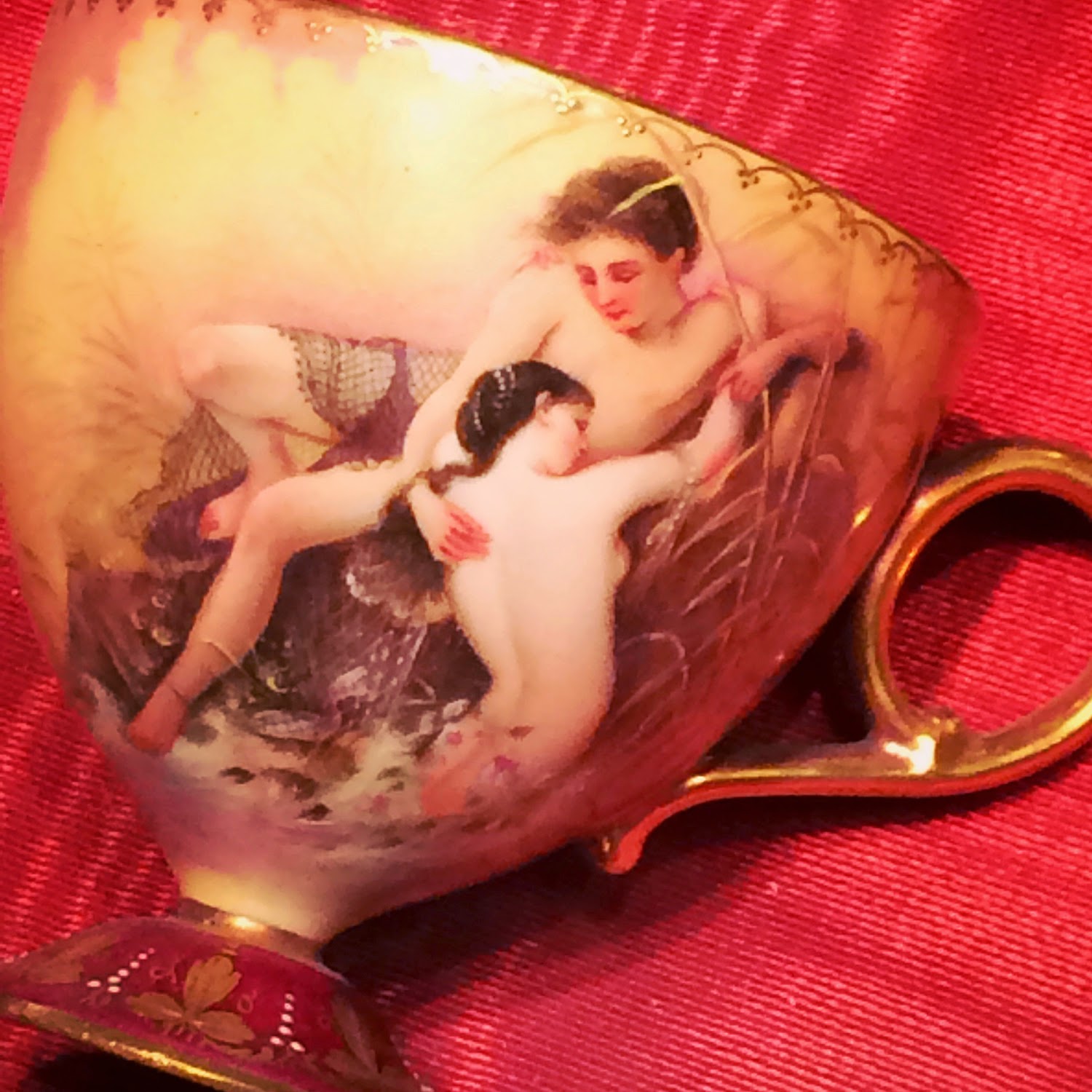 Nudity and passion seem improper
however delicately painted upon a teacup.

I hide a smile as Grandmother places linen upon slender lap,
gently nibbles upon a scone, her Wedgwood rose demure upon its saucer;

burn my tongue on spiced Chai.  Insist on seconds.
Grandmother praises me for being a lady.  I assure her I'm a quick study.


This is for "Imaginary Garden of Real Toads - Play it Again, Toads!"  I selected the archived challenge:  "Poem sketching"  I may have bent the rules a bit for this one, but I wrote a long list of words evoked by the above image.  I tried to pick four that were quite different and this is what I got.  The four words were:   teacup, passion, grandmother, painted

It looks good on him,
yet off color.  Perhaps too bright,
too vibrant, too loud?

There has been
a lot of change in the last year
and you may want to live
in your happy land of denial,
but I wouldn't invest,  however, I

assure you fatality is a condition
that with  proper care and rest
may show improvement.

your next payment is due.
No time for tears in your cereal bowl.

How lucky am I that a poem of Hedegwitch's happened to be there?? !  It is the third stanza and I will provide a link HERE to her Verse Escape Blog (which I follow via e-mail), and the direct poem "Love Letter" for you to see it in it's real context.  (Joy, I will delete if you want me to - I hope you don't mind).

I also got lucky with another poem by Tom of Quarry House as I subscribe to his feed as well.  It is HERE.  His lines are a bit more scattered throughout my "Spam" poem.

Some examples of SPAM poetry HERE.

This may be the first poem I wasn't able to come up with a photo prompt! 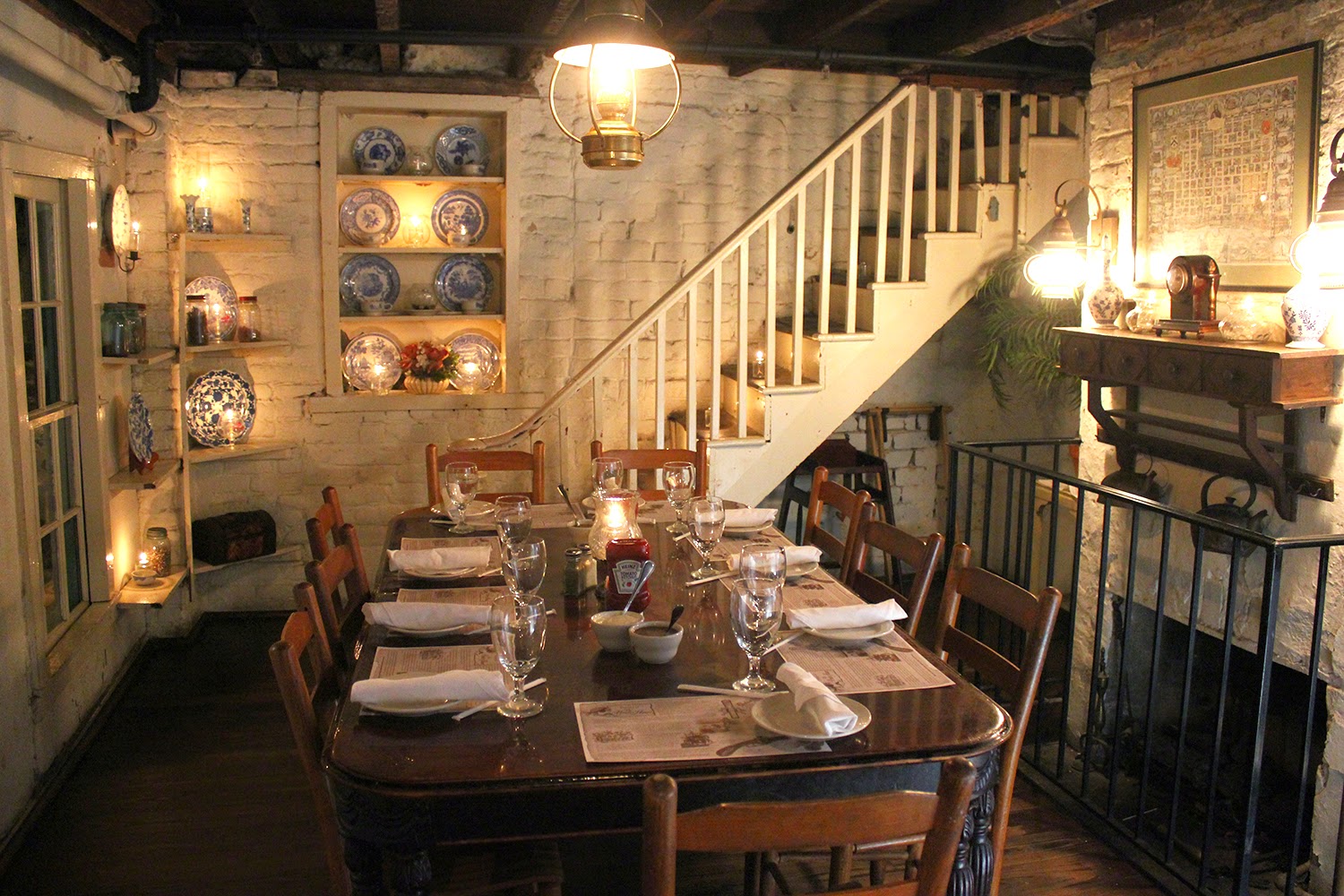 Utopia existed in Oglethorpe's mind -
no slavery, no liquor, no Catholics;
a southern Eden of mulberry trees,
potash, and grapes atop Yamacraw Bluff.

Never blossomed, this vision of his.
Shanghaied; another innocent victim
drunk and spirited away upon pirate ship
via tavern's secret tunnels.

Pull up a chair and celebrate what might have been.
Toast a botanical experiment lost in the swagger
of Britain's newly minted port hosting salty sailors,
soldiers, and feminine charms.

Yet, the Herb House remains,
innocently nestled beside past debauchery
and piratical scandals; a reminder of gentler visions
where profit wasn't king. 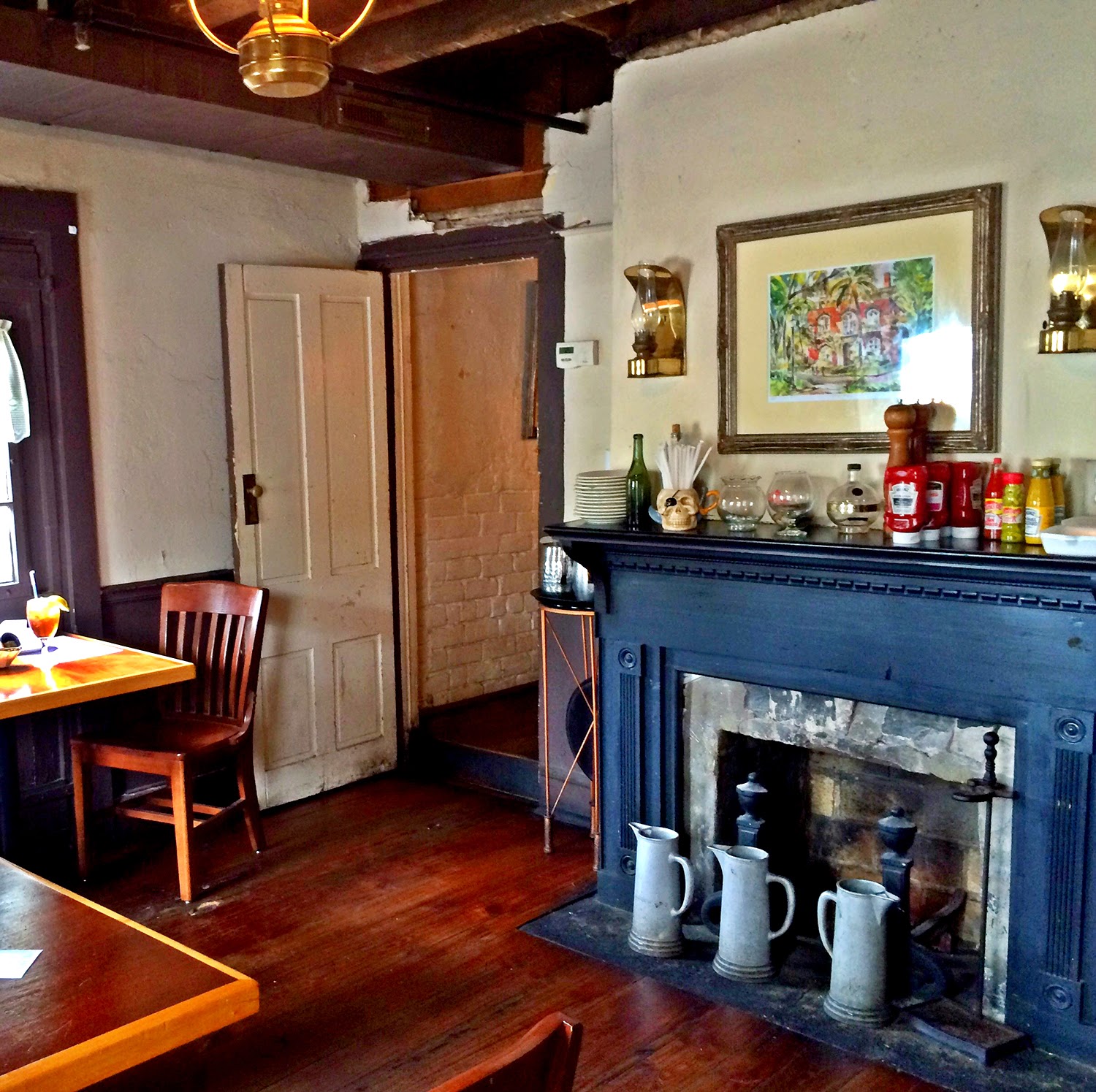 Savannah, GA, the thirteenth American colony.  General Oglethorpe and 120 passengers landed on a bluff high along the Savannah River and were greeted by the Yamacraw Indian chief, Tomochichi.  The General's plans really were of a utopian quality - the only reason he banned Catholics was he was afraid of "Spanish sympathies" with nearby St. Augustine, FL.    (Early Savannah history)  (Oglethorpe the utopian) 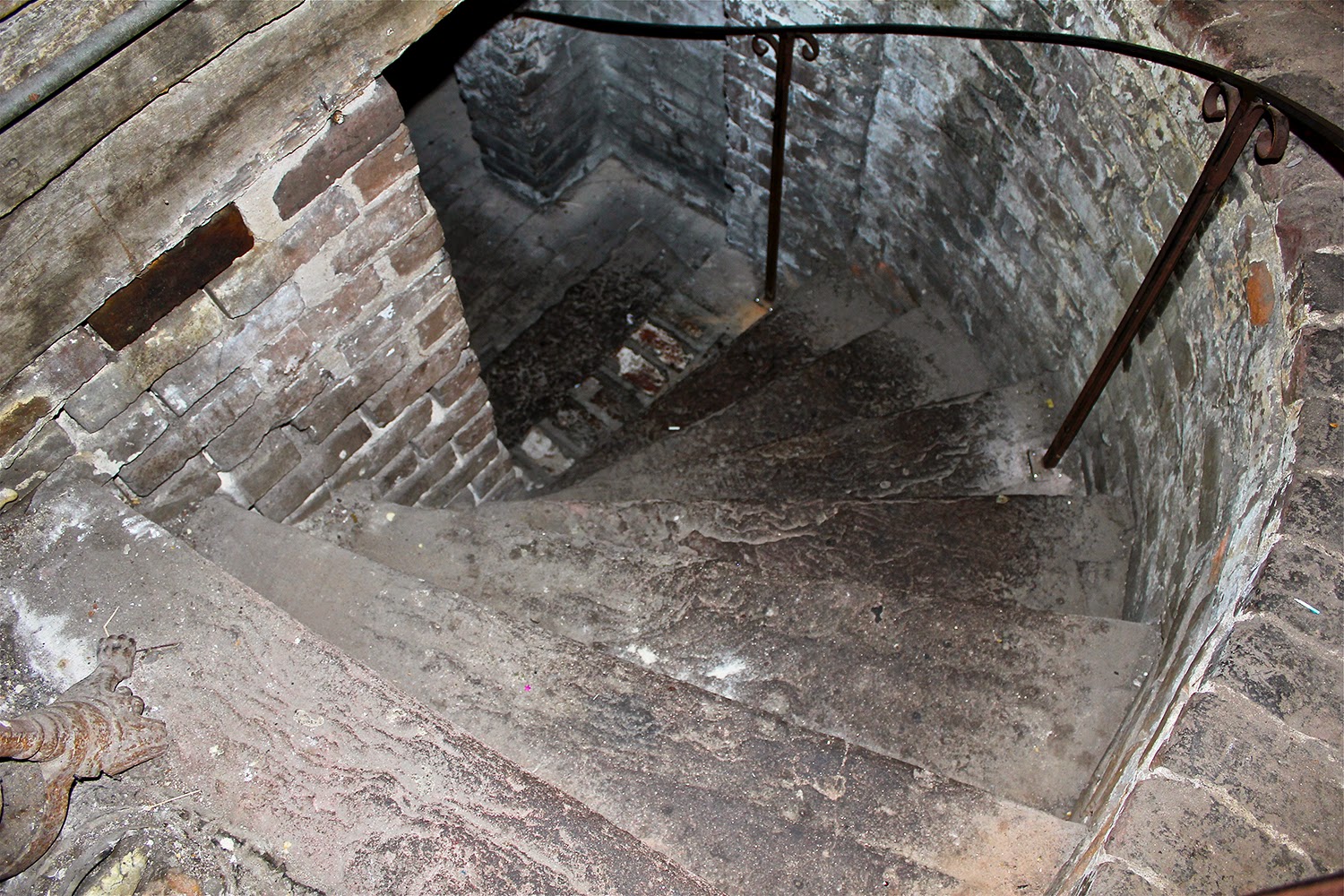 I was away for seven days celebrating 25 years of marriage - we stayed in St. Augustine, FL and Savannah, GA.  I have eaten in both rooms of the Herb House and it also has an upstairs which is not open to the public.  It has a tiny footprint, but quite a history.  The Tavern Inn next door, now called the "Pirate House," has a cellar with secret tunnels that lead to the Savannah River.   Both places are reportedly haunted.

This is linked with "Imaginary Garden with Real Toads - Weekend Mini Challenge Poeticizing Out" and "The Tuesday Platform".
Posted by Margaret at 12:54 PM 16 comments: by Margaret Bednar, originally written May 15, 2011


I wrote this a few years ago - I did change the title.  This is linked with "Imaginary Garden with Real Toads - Artistic Interpretations - Art with Toril".  I am hosting this challenge and invite you to click on the link above and visit the other poets and view more of Toril's amazing artwork.
Posted by Margaret at 12:04 PM 16 comments:

Wedged high within a tree,
a swirl of twigs, grass and mud
temporarily holds the sky,
nurtured and nestled.

Spring brings many shades of blue sky - and a few storms.  My favorite spring sky is a robin's egg blue, with a few clouds, calm and pleasant.

This is for "Imaginary Garden with Real Toads - Artistic Interpretations - Art with Toril".  I am hosting this challenge and invite you to visit the other poets and see more images of Toril's beautiful art work.  Just click on the above link.

But what to do with rubies that bed beneath the soil?
Boiled, roasted, or steamed they may be,
yet childhood memories still haunt - sitting table side for hours,

trails of red saturating kitchen chopping block;
proof they suffered as much as I.

Perhaps a truce
with brushstrokes of carmine, boysenberry, and pink
framed upon kitchen wall;

This if for "Imaginary Garden of Real Toads - Artistic Interpretations - Art with Toril".  I am hosting this challenge and invite you to join in the fun.  More poems by a variety of talented poets and more art work by Toril.

I did find one recipe that I might like that includes beets.  I have yet to try this. 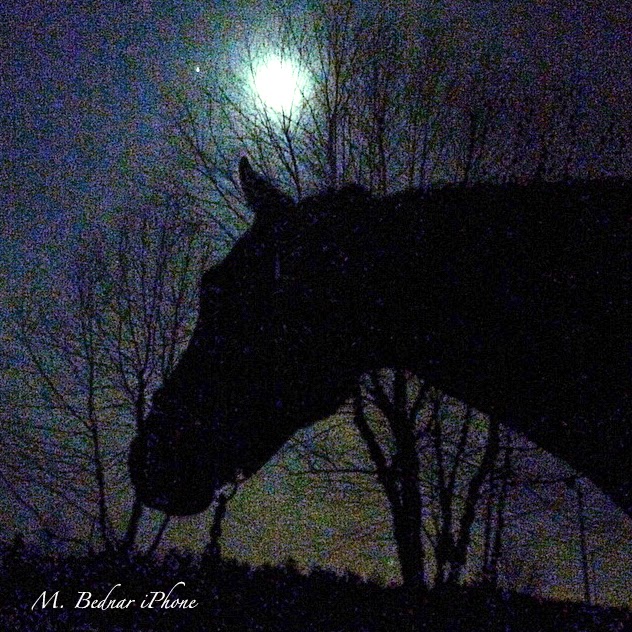 A waxing gibbous is tonight's moon,
glow to the east, Jupiter -
court each other above our heads,
illuminating March's waning wint'ry sky.

Necklaced through naked tree line
they invite us to linger,
admire velvety silhouettes
faintly seen in this blue darkness -

the only noise
mud splattered boots and hooves
slowly making way towards the barn.

This was hastily written to try and capture the magic of evening of March 2 - what a beautiful sunset and night sky!  The light from the moon and what I now know was Jupiter was breathtaking.  I hear Venus is the only thing that shines brighter than Jupiter!
Posted by Margaret at 11:54 AM 18 comments: