Wispy-white mare's tails swish sky's blue this noon as heated fingers reach through poplar stripped branches and tickle arms and legs, bare.  It's days like today, after a frost or two, that pony and I would become sure-footed mustang and Indian, riding bareback through stubbled cornfield and quarry, descending into time, scouting for arrowheads.  It's days like today that cradle me, morning mist no longer blankets uplifted crowns of gold but hovers over the expanse of denuded fields where I imagine tepees once stood and Cherokee raced dug-out canoes along the French Broad and Swannanoa.  It's days like today, as goldfinches pick sunflowers dry, sunlit logs buoy river otters and turtles, and evening's pink veil deepens to purples and reds that I reminisce and as swiftly as the seasons change, anticipate renewal.

You are invited to listen to me read my poem:  https://soundcloud.com/margaretbednar/haibun-indian-summer


This challenge is linked (late) with "Imaginary Garden with Real Toads - Artistic Interpretations with Margaret - Carol Law Conklin Batik Artist."  Carol Law Conklin is a Batik Artist with a wide variety of creations she highlights and sells on her Website, Amity Farm Batik, and Etsy Store.  She has a Facebook page and I also enjoyed watching her video batik "how to" tutorials.

Not supposed to name a Haibun, but I think of this one as "Indian Summer"   This is also linked with "dVerse Poets Pub: Haibun Monday - Free for All"

and... "Imaginary Garden with Real Toad's - The Tuesday Platform".

Note:  mares tails:  Cirrus uncinus is a type of cloud derived from Latin meaning "curly hooks". Also known as mares' tails, these clouds are generally sparse in the sky and very thin.


An interesting Article about the rivers and creeks that wind their way through Asheville, NC:

pause to admire
what out of thin air she wrestles to paper:
scenes, delicately displayed, vibrantly rendered.

Admire strength and tenderness
in her youthful artist's mark.
Revel in the joy her little face sheds
as proudly presented to me they are.

her pageantry only beginning; college cocoon
soon left behind.  My blossoming butterfly will soar.
And her crayons will be carefully tended.

Linked with "Imaginary Garden with Real Toads - Sunday Mini Challenge - Micro Poetry - The Cross-roads"  and the poetry of Kwei Brew "The Mesh"  Loosely played with the them crossroads - (childhood into adult) and I FORGOT to make it only ten lines.... sorry, Kerry - chalk it up to a mother's getting carried away with memories:)

Chests don't puff and wings don't flap,
but arms and hands do half their talking.
Boisterously joust, punch or slap a back,
compare prowess on video games,
spout political views - Trump's their man...
and I'm taken aback.  The primaries have just begun
and Donald's ...

I look closer.  Calloused hands. Sincere hearts
(I can tell these men are Mama's boys)
and a bravery that underlies words.
I may be projecting stereotypical ideals,
but dedication and honor from men such as these
are often first to march off to protect hearth & home.

As a salty Margarita tingles my tongue,
I smile as the waitress sassily reprimands the crowd
(who apologize swiftly),  and absorb this nostalgic
Italian diner, (feeling a bit like Alice in Wonderland)
and ponder if I've glimpsed the future.

I keep harking back to this memory ...  I adore NYC - the diversity of people and languages, the mix of white and blue collar, the food (the FOOD!) the parks built by Frederick Law Olmsted...  I love visiting.  But the first time I visited two years ago... it was a bit of a culture shock - not in a negative way but just a LOT to take in.  Even now, I am happy to stay a week or two and return home to my mountains.  But I'm always soon longing to go back to visit my son and the big city.

The lunch at the Italian restaurant has been ingrained in my mind.  I realize most of these men most likely did not go to college, are hard working men - I overheard some were working two and three jobs - they supported people in need - I heard them talking about a fund raiser for a buddy who had hit hard times...  compassionate, boisterous, loud - and men who love to laugh and swear.  I couldn't help but adore them - and they were voting Trump.

On the Eve of November 14th


On the Eve of November 14th

They say it's an occasion for natural disaster;
and I've proof:

my blood pressure's started to rise,
my chin's (or should I say chins?) not as defined,
and morning's mirror isn't so kind.

No "evidence of causation", they say
but certainly "clear coincidence"
if 50's pivotal, then 51's
the beginning of a tsunami.

Is it coincidence tonight's supermoon is bold?
Asserts itself through naked branches,
stirring emotions...

Coincidence this past year
I've seen more Dr's than the past 10?

Tonight this illuminated token
will sink into the morn of my birth;

perhaps I'll treat its deposit as rejuvenation for mind, body and spirit?

This is linked with "Imaginary Garden with Realt Toads - Tuesday Platform"
Posted by Margaret at 12:11 AM 10 comments:

One of my favorite version's of "Hallelujah" (other than his own of course) RIP, Leonard Cohen

Manly gentleness,
my Hallelujah, my strength,
holds me sleepily,
a little too warmly, but refuge
overrides menopause.

I'm old enough to know sadness,
even happiness, has peaks and valleys;
yet somehow I need this touch,
this settling of feeling

for me to whisper prayers
to a God sometimes ignored,
until becalmed I fall asleep,
stilled into a cocooned slumber
of hushed benediction.

This is linked with "Imaginary Garden with Real Toads Sunday Mini-Challenge - Still Points"
Posted by Margaret at 11:16 PM 13 comments: 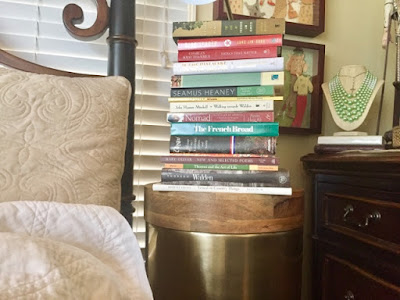 "When I am near the end of a book,
I have to sleep in the same room with it."  - Joan Didion

Quilt-wrapped silence, soft, over-the-shoulder light,
breached only by a crisp cadence of slowly turned pages,
purring feline, or perhaps a winter's fire banked in the grate.

It's hard to let go of loved ones, held tenderly,
pages never creased; occasionally sprawled upon my chest,
eyes having surrendered to their dancing drops of black ink.

Books deeply double stacked await for favor, for obsession
as my finger slides across spines trying to decide
who will share my bed, my mind into the wee hours of the night.

This is linked with "Imaginary Garden with Real Toads - Play it Again, Toads!"  I chose "The Poetry in a Quote" prompt hosted by Susie Clevenger back in April 2015.

On the Eve of an Election

On the Eve of an Election

It's quite a novelty to absorb a biography
graced with Lincoln's genius of persuasion,

revel in integrity of a cause contentious -
know healing was hard won,

in some corners, still sought.

As a nation, too often partisan becomes policy,
civility's tossed aside, and the adversary we court,

if we pause to notice, often resembles us.


This is linked with "Imaginary Garden with Real Toads - Get Listed "What Fresh Hell is This".   We were to ponder this upcoming USA Presidential election with the style of Dorothy Parker or Oscar Wilde in mind (doubt I accomplished that task)   We were also given a word list and asked to use at least 3.  I used 5 (or versions of ): novel, toss, look (notice), enemy (adversary), and cause.
Posted by Margaret at 1:16 PM 9 comments: