I will be taking a blogger break for the next week.  I will not be posting but will be catching up visiting and commenting on numerous past poetry challenges and posts made this week.  A whirlwind of activity - finishing up the week homeschooling my two youngest and at the end of this month will be moving half of our household possessions to the mountains!

I am thankful for my fellow poets and friends here in blogger-land and wish you a wonderful ending to my favorite month of November.

Experimenting with my poetic voice - it really is a storytelling of sorts, that is reading poetry.  I erased numerous times, not happy with the way my voice fades in and out and stresses certain words. Not really thrilled with this version, but I have confidence with time I will improve.

Bittersweet twines,
grasps a hold of bricks and posts
as kale flashes lavender corsages;
no deferring to colors smoldering.

for tyrannical crows
who claim field and fence
where little bluebirds and cardinals
mid-summer freely danced and swooped.

for crisp air that chills my cheeks,
makes me hurry homeward
toward promises of smoldering hearth,
entwined arms and legs.

I'm thankful for celebrating together
the richness of another season's
coming and going and the bountiful gifts
that life and death provide.

"If You Step upon a Crack" 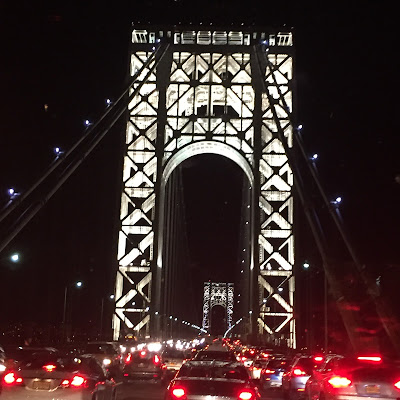 If you Step upon a Crack...

Skipping ahead he avoids cracks
as not to break my mother's back -
head bent low upon his task, his concern dear.

My hand yearns for the warmth of his,
to have him safely by my side -
yet I forgo such a tether,

try banishing the "what if" of terror
that may lurk beneath Manhattan streets,
along well-worn Brooklyn walkways.

Paris is an ocean away, but as we idled
in the quagmire of George Washington Bridge,
"what if" kept taunting

and I could see no way of escape -
certainly not down.  I'm afraid of heights anyway,
so we turned up the music and sang.  Loudly.

The inevitable comes; he steps on a crack -
assures me it's just a game.  Yet, in a heartbeat
I'd gladly sacrifice my back,

to never silence children's voices,
never stifle their dreams, their talents.  I wish
it was as easy as that.

You're Invited to Listen:  http://margaretbednar365.blogspot.com/2015/11/if-you-step-upon-crack.html

Written in response to the Paris terrorist attack... 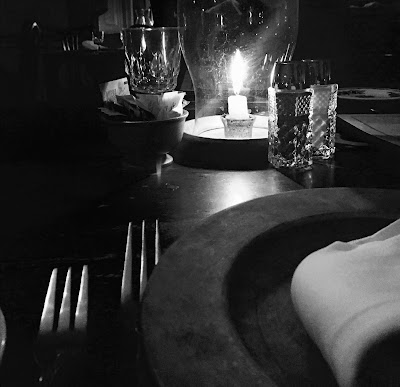 yet an old friend, suspended, arms uplifted,
winks back through square panes of glass.

Wonder if room eight's
mysterious haunt
watches us toast to love;
for time we've been blessed.

tragically hers ran out.

Past resides here,
tells stories
to those who feel them;
content with endings happy,

Yet Future nestles here as well;
creaking, groaning floorboards
record through dawn and dark
every chair leg that slides back,
every napkin dropped upon empty plate;

marvel we're part of the narrative
witnessed within these red brick walls. 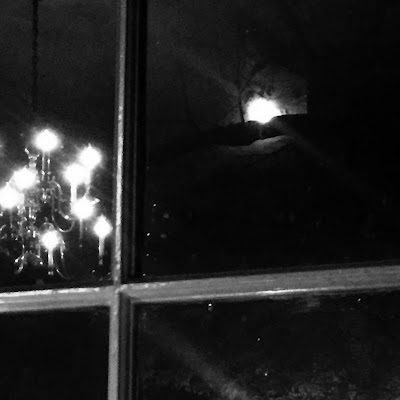 A poem reflection on my dining at a historic tavern in Alexandria, VA. (just outside of Washington D.C.)   I also just got back from a trip to NYC - specifically Brooklyn to visit my son.

This is linked with "Imaginary Garden with Real Toads - Tuesday Platform"

The tavern in Alexandria, VA was built around 1785, and the City Hotel in 1792.  John Gadsby leased the property from 1796-1808 and it is his name that is today attached to this historic location.  More info on Wikipedia

HERE is the link to what I copied & pasted below (and there are a few photos).


In September 1816, a young couple arrived by boat from the Caribbean to the port in Old Town Alexandria. They docked off of Prince Street, where the man hired a carriage to transport them to Gadsby’s Tavern, or what was then known as the City Hotel, the center of social life in early Alexandria since the 1780s, when Royal Street was part of the country’s first national highway.
According to legend, the young couple was, in appearance at least, well-heeled, and the woman was very beautiful. But she was also very ill. Her husband took room number 8 at Gadsby’s and carried her in. He jarred the door behind them, and as he did so, the number 8 slid sideways—the symbol for infinity.
Frantic with worry, the man called for a doctor and two nurses. When they arrived to see the patient, however, the man refused to give his name or his companion’s to the attendants or to Mr. Gadsby, the owner of the hotel.
Soon rumors were flying around Old Town about the woman’s identity, and they continue to this day. Some say she was the daughter of Aaron Burr, a famous but none-too-popular politician of his day whose daughter Theodosia was presumed dead, having been lost at sea years earlier, but there were whispers that Theodosia had run away with a lover and her earlier disappearance was a cover-up. Others speculated that she was the daughter of an English lord eloping with her lover, a commoner. Some people even believe that she was Napoleon Bonaparte in disguise.
Whatever her identity, the woman languished in pain for three weeks, succumbing to her illness on October 14, 1816. Just before she died, her husband asked Mr. Gadsby and those attending her to come to her bedside. Her fate was inevitable, so the couple asked those gathered to swear an oath. In that oath, they swore they would never reveal the identity of either the man or the woman.
The woman was buried at St. Paul’s Cemetery, just south of Duke Street. Her husband paid for the elaborate tabletop tombstone and the inscription of the long, melancholy love letter inscribed upon the stone. The epitaph begins, “To the Memory of a Female Stranger…”
This is where the story gets even more peculiar. Immediately after the woman’s death, the man traveling with her left town without paying for any of the expenses they had incurred, including the room at Gadsby’s, the medical care his wife received, and the burial and funeral.
Some people even say that the female stranger also “lives on” at Gadsby’s as a ghost, haunting its halls and rooms. Just a few years ago a young student came home from college and took a summer job as a server at Gadsby’s.  On her first night working at the restaurant, she went to the kitchen to pick up her customers’ meals. She positioned the plates on her arms, turned around, and the Female Stranger was staring her in the face. She spoke to the girl and vanished. Terrified, the server screamed, dropped the plates and fled the restaurant.
Other people say they’ve seen the Female Stranger at Gadsby’s in room number 8 and at parties in the ballroom. But does she really haunt the building? You’ll have to take the Ghost and Graveyard Tour to decide for yourself.
Alexandrians were furious. But the man had been quite clever: the only people who knew his identity, or that of the Female Stranger, had sworn an oath that they would keep their identities secret. Thus his debts would go unpaid, and the mystery lives on today. 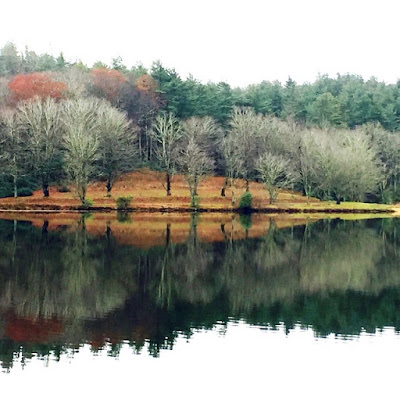 And I can't help wonder,
the place of their first kiss;
her seal (the one held in my hand)
upon his dear, freshly shaved cheek?


This will be linked with "Imaginary Garden with Real Toads - Tuesday Platform".
Posted by Margaret at 12:01 AM 17 comments: 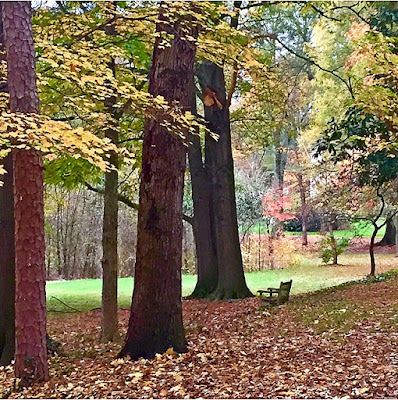 When I was a child, I loved a willow tree.  She embraced me with cascading,
filtered-green light, offered me a haven where butterflies were fairies & sprites, hid me
when I tried to make willow bark tea (Stirred leaves and bark in hot water. Sipped.  And spit.)

Willow fed my soul, allowed me to peek out at the world.  Observe.  Safely retreat.
Late fall, I'd watch her golden sheen hang on far longer than most; I liked to think
because she would miss me.  I know I missed her.

I turn fifty this November.  Contemplate time upon a park bench as Autumn's bounty slowly fades, falls.  Admire near perfection; for there is no willow tree in sight. Perhaps I will find her
before season's end, say hello once again to wood-nymphs and anglewings.


A willow tree, in my minds eye, is the grandest of trees.  I'd have to say the Southern Live Oak is my second favorite tree with it's wide spread and heavy branches .

This is linked with "Imaginary Garden with Real Toads - The Eye of the Beholder - Micro Poetry"  I chose free verse, and the poem must be written in 10 lines.   I did it in 9 LONG lines.  Not exactly micro I'm afraid.
Posted by Margaret at 12:17 AM 15 comments:

after all his eyes caressed my shoulder first
as I sat between him and them.

He learned my name come May;
I lived joy all summer  -

the way it rolled off his tongue, the way
he leaned towards me.  Smiled.  The way
I imagined a sexy wink...

epic heartache, pillow drenching tears,
the almost purging of him from my brain.

Celebrate to this day
I was never mouse to his cat.

This is linked with "Imaginary Garden with Real Toads - Out of Standard - Remember, Remember"
Posted by Margaret at 6:19 PM 10 comments:

Email ThisBlogThis!Share to TwitterShare to FacebookShare to Pinterest
Labels: Imaginary Garden with Real Toad's Out of Standard 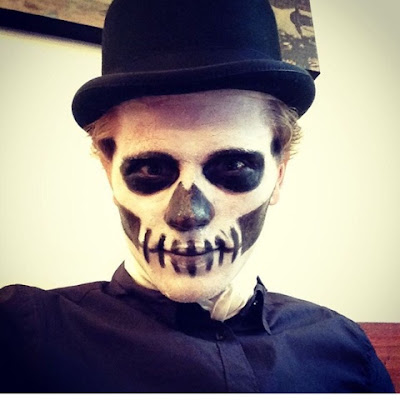 Year 'round I wear
crucified Jesus about my neck

but come All Hallow's Eve 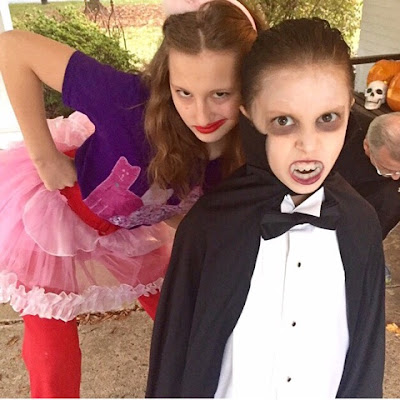 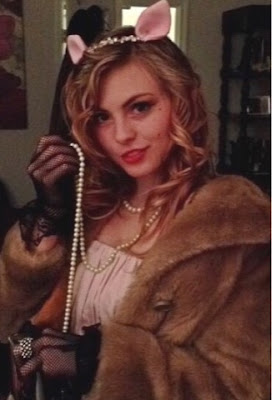 (All pumpkins my children's original designs) 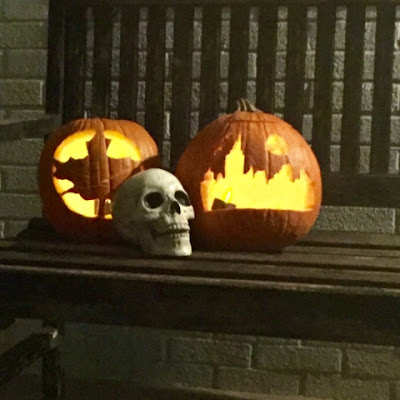 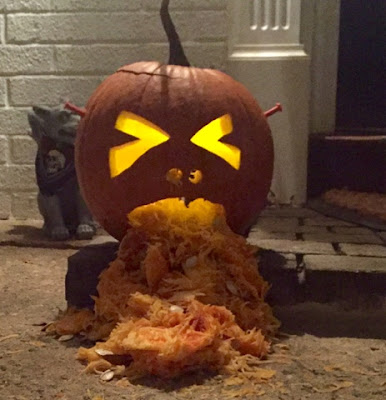 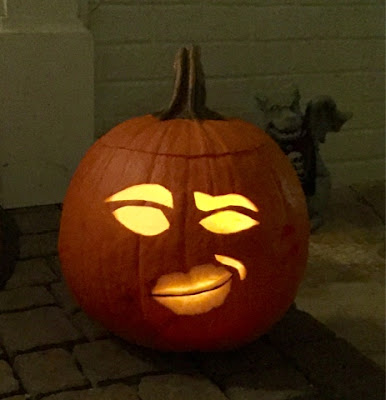 Hallow means Saint. Who says Catholics can't do guts and gore with the best of them. When my kids were young, I did dress them as saints a few times (not the blood and gore I noted above, but perhaps I should have!)

Googling costume ideas for this year, I saw a Mother Teresa with a short, tight dress with lots of cleavage.  I would be so afraid lightening would strike me!  Ha.

We had fun this year. My youngest was Dracula, and my oldest a skeleton in NYC.

This is linked with "Imaginary Garden with Real Toads - Flash 55."   My internet connection is mainly not working at my house and I will be hit and miss until we can have the cable company come and work its magic. Trying to do everything from my cell phone is not ideal.