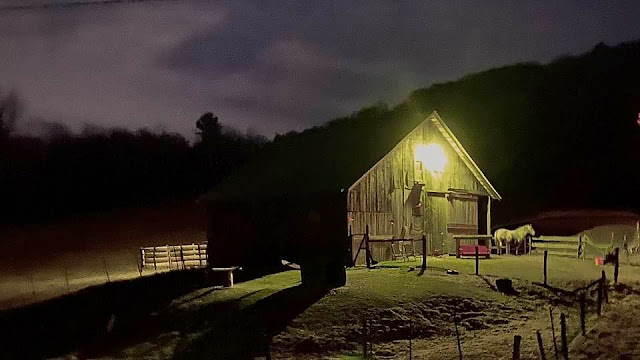 Dusk and early twilight are magical,
nights not dark enough to do anything but soothe;
it's the hush before the witching hours,
a time (this Catholic girl) is certain to be tucked inside
beneath quilt and comforter as fixed prayer is silent in the dead of night.

I'm a country girl at heart, love to walk my dogs
in this early blue-black, tonight's steps dampened by mist rolling in;
other times echo off mountains that frame the moon.
My road meanders along open pastures and sections claustrophobic;
behind rhododendrons and pine fox dart and deer stare, still as statues.

We walk by the farm with red barn swing, three goats
and gray retired horse.  The floodlight reminds me of Bethlehem's Star,
a beacon of golden light, spilling forth warmth, wonder, love.
Tonight clouds obscure the sky, no twinkling lights as we trek homeward,
but I'm illuminated, December's glory internalized.

In the Western Christian tradition, the hour between 3 and 4 a.m. was considered a period of peak supernatural activity due to the absence of prayers (fixed prayer) in the canonical hours during this period.

I used #7 The nights are not dark enough - an excerpt from the amazing poet, Kerry O'Connor, from her poem:  "Self Portrait in Night"
Posted by Margaret at 9:38 PM

I like how you’ve taken Kerry’s line and woven it into a light-filled autobiographical poem, Margaret. I love the lines:
‘a time (this Catholic girl) is certain to be tucked inside
beneath quilt and comforter as fixed prayer
is silent in the dead of night’;
‘in this early blue-black, tonight's steps dampened by mist rolling in;
other times echo off mountains that frame the moon’;
and
‘but I'm illuminated, December's glory internalized.’

Your final line is very beautifully written, Margaret. The night places seem quite friendly and serene as you have described them.

I grew up a country girl. And blessed a million times for that introduction to a simple existence - or so it seemed. In reality it was full and rich and those years shaped the woman I am. You as well. Happy Holidays!

The best and brightest light is the one we carry within. I love this stroll your poem has taken us on. It makes me miss my childhood home, in the best of ways.

December with its darkness is the perfect backdrop for light isn't it?

How else can you celebrate light
then in the presence of night?

I like how there's a feeling of linking your spiritual home with your earthly one, and how much beauty and comfort you find in them both.

Oh, I needed the light your brought with this poem. Bless you for your beautiful words

I felt I was walking with you, the dogs, past the barn. I love the red swing.....and the light left on for the tired old horse. Beautiful, Margaret.

Although I didn't grow up in the country, I spent a lot of time there as a child, with grandparents and various aunts, uncles and cousins. You've recreated such night-time strolls perfectly, and I'm fascinated to note you could as well have been describing rural areas of southern Australia as where you live.