Abraham Lincoln, the Poet and a poem by me "The Monument" 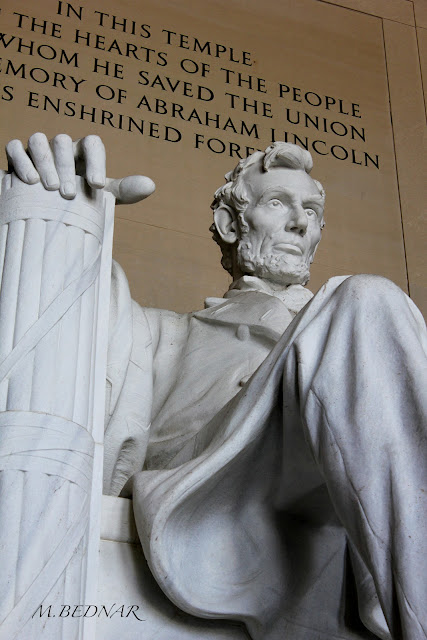 My daughter and I recently took a trip to Washington D.C.   The first place I visited was Ford's Theatre, which I will share in my next post.  This is, of course, the statue at the Lincoln Memorial.  The view overlooking the reflecting water and the Washington Monument (which Lincoln gazes at eternally) was a bit disappointing as the water was drained for repairs.

Standing beneath this imposing stature and looking up is awe inspiring, although something tells me Lincoln would not like it as he was a humble spirit.  But beneath this gaze, I felt hope, and I'm glad he has been honored in this way. Upon gleaming stone
rests a finger,
tapping eternally
and a fist
forever contemplating.

while a foot
hovers,
seemingly eager
to lead...

A life force
united with our Maker,
relying solely
on yesterday's
good deeds.

Would you like to hear me read this poem?

Check this out on Chirbit

I linked the above poem up with "dVerse Poet's Pub - Open Link Night".  Please skip on over if you want to view some FINE poetry.  Also posted this over at "Poetic Asides" - Wednesday Poetry Prompts: 182

And did you know he was a poet?  Below is an excerpt from the Library of Congress site on Lincoln:

Lincoln became interested in poetry around the age of twelve, and remained an avid reader of poetry throughout his life. His earliest exposure to poetry likely came through Thomas Dilworth's literacy textbook A New Guide to the English Tongue, which included several short poems. When his widowed father Thomas married Sarah Bush Johnston in 1819, she brought to the household a small library that included William Scott'sLessons in Elocution, a gathering of poetry and prose for youth. It was from Scott's anthology, which Lincoln began reading seriously around 1825, that he first came into contact with many poems and poets that remained lifelong favorites, including Shakespeare, who ranked supreme in Lincoln's literary pantheon. In an 1863 letter to comedic actor James Hackett, who had recently published the book Notes and Comments upon Certain Plays and Actors of Shakespeare, with Criticisms and Correspondence, Lincoln outlined his familiarity with Shakespeare's works:

Some of Shakespeare's plays I have never read; while others I have gone over perhaps as frequently as any unprofessional reader. Among the latter are Lear, Richard Third, Henry Eighth, Hamlet and especially Macbeth. I think nothing equals Macbeth. It is wonderful. Unlike you gentlemen of the profession, I think the soliloquy in Hamlet commencing "Oh my offense is rank" surpasses that commencing, "To be or not to be."

Other poets whose work Lincoln enjoyed included Lord Byron, Thomas Gray, Thomas Hood, Oliver Wendell Holmes, John Greenleaf Whittier, Fitz-Greene Halleck, and, second only to Shakespeare, Robert Burns. [2, 3, 4] Lincoln's love of Burns's poetry was so widely known during his presidency that he received many invitations to annual celebrations of the Scotsman's birthday. When Alexander Williamson, the secretary of the Washington Burns club, wrote Lincoln asking him to recognize the "the genius of Scotland's bard," Lincoln replied: "I cannot frame a toast to Burns. I can say nothing worthy of his generous heart and transcendent genius. Thinking of what he has said, I cannot say anything worth saying.”

Not only did Lincoln read poetry, but he memorized large swaths which he frequently recited to friends and inserted into conversation. His favorite poem, which he recited so often that people suspected Lincoln was the author, was William Knox's "Mortality," or, "Oh, Why should the Spirit of Mortal be Proud?" So great was Lincoln's affection for the poem that he once wrote, "I would give all I am worth, and go in debt, to be able to write so fine a piece as I think that is." Other favorite poems Lincoln committed to memory were Oliver Wendell Holmes’ "The Last Leaf" and Edgar Allan Poe's "The Raven." Both are examples of the gloomy, melancholic poetry of which Lincoln was so fond and at which he would try his own hand.

In addition to his poetic prose, exemplified by the Gettysburg Address, Lincoln was the author of several capable poems. The Library of Congress' Presidents as Poets Web site includes the text of these poems and historical information about their composition. 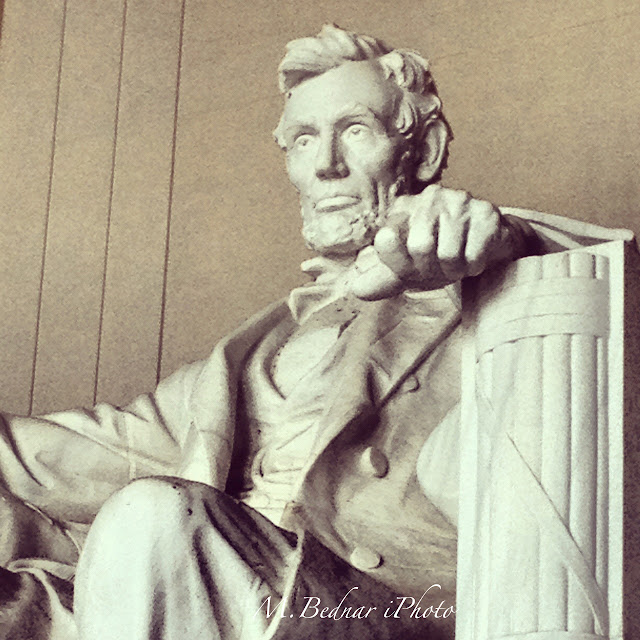 I have read many books on this great man.  I think "Team of Rivals" I will be reading off and on for the  next year as it is rather... well, long.  But one book I am having a bit of fun with is "Abraham Lincoln, Vampire Slayer" (I'm a bit embarrassed to admit this... :)
Posted by Margaret at 12:22 AM

Hiya Margaret,
What a noble and suitable post with the observant introductionary poem of your own. Perfect for the day. Hoping you have a warm pleasant Fourth July day for your celebrations.

I enjoyed reading your commentary and poem about the great man. I was telling my hubby that we should visit this place sometime, maybe this year ~ And of course that he is also a poet is a delight (the movie is also good one) ~

thankyou for the poem and the interesting info about Lincoln.

nice...i have studied lincoln a bit...and the monument is pretty amazing and expressive as well...great verse for independence day...

I was immediately struck by the way you focused on the small details: his fingers, eyes and raised foot and used them as interpretative means for your poem. Fine work, Margaret, and just wonderful photos.

I so admire our 16th president, and all of his accomplishments. I love your capture of the monument,the tapping finger, the fist, wisdom withheld, foot hovering eager to lead. I also appreciate all of the background shared. No doubt he was a poet and scholar. I have visited Gettysburg many times, and I get goosebumps standing where he gave his eloquent speech. And standing on the hallowed ground I never fail to remember or be moved by his words, especially:

"... we can not dedicate, we can not consecrate, we can not hallow this ground. The brave men, living and dead, who struggled here, have consecrated it, far above our poor power to add or detract. The world will little note, nor long remember what we say here, but it can never forget what they did here."

Thank you for sharing your lovely photos and poem, and the information about this great man.

I really enjoyed all the extra info about this wonderful man/president and while I was reading the poem I kept going back to the photo to catch all the details you mention...a poet's eye!

I never noticed the position of the hands Margaret, till your artist's eye spotted it--they are very eloquently posed, aren't they? Thanks for all the side information--I didn't know Lincoln was a poetry enthusiast, but did know he was a devouring, self-educated reader, and it figures that Shakespeare and Burns would be in there. I loved Team of Rivals, btw--a lot of insight into the times and personalities, and into Lincoln himself.

You really sacrificed lots of time to bring us to this wonderful take Margaret! It rekindled sweet memories of DC. Looking across the imposing Wash.Monument was fascinating. I stayed on for the somber Changing of Guards. Later we visited the Smithsonian, The White House (from a distance) Arlington(an eternal flame was kept lighted at Roberts K's) among others.Thanks for the memories Ma'am!