Three crosses dominate the pasture hilltop high above winding gravel road, Appalachian mountains a backdrop to these Christian sentinels.  Or superstition as some folks insist.  Wonder and well-being flood my soul but to each his own.

Here in the South, there's plenty of legend and lore, such as deep porches with ceilings of haint blue, traps between realms of the living and dead, tricking turbulent spirits as water they cannot cross.  I've seen cobalt blue dangling from crape myrtle trees, bottles that seize minions set on maiming souls, evil scorched come morning sun.  Bottle trees reside as folk art outside upscale shops; like Ouija boards in toy isles - yet one tempts me, the other terrifies.  They say the Devil's beguiled by his own handsome face, mirrors hang upon southern porches, distract him until the swell of morning sun, wherein he turns tail for hell, house-invasion thwarted.  And of course, Bloody Mary chanted 13 times, hand mirror held aloft, flight of stairs ascended backwards, room darkened, candles lit... beware, benign or wicked she may be.

This is a Haibun - the ending Haiku doesn't really qualify as it doesn't hint at a season, but it IS an American 5-7-5 syllable count... I had fun writing it though.   We ALL did this as kids, right?  Even us Northern ones.  (Holding breath as one passes a cemetery so the dead spirits don’t enter our bodies)


and the photo from The Sunday Muse that inspired it all: 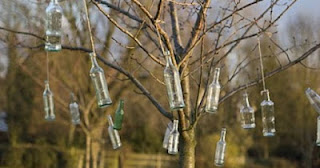 Amusing legend and lore. These always fascinate me. Sometimes hidden truths are there in the guise of stories full of sighs. The end haiku is interesting.

"Blue faces wide eyes" I love the vision the evokes Margaret! Love your deeper view into the South's legends and lore! A wonderful take for the prompt. So glad to see you here Margaret!

I've always thought that superstition is often what some people give to beliefs they don't agree with or happenings they can't understand. Superstition, myth, lore... They are all stories (true somewhere).

Maybe the haiku is a senryu? It certainly has many elements of the latter. Whatever its label, the imagery is powerful.

I love this and all of the intriguing info it contains about beliefs in the South. Very cool, Margaret. I love "haint blue", and love the whole idea of bottles hung in trees. Wish I had done so, when I had a tree. LOL.

Check it out, she posts an Eastern form for my prompt, perhaps thinking that bottles and mirrors will save her! Actually, I enjoyed this, and I love the photograph you included.

And yeah, what is with Ouija boards still being sold as toys? I won't go near one.

So many superstitions and stories! I enjoyed your haibun, Margaret.


What fun to hear of all the superstitions. Some I knew, some not. I thought all bottle trees were blue. Your haibun was very entertaining!

Oh, what a delightful account! I wasn't familiar with all of these – but yes, I'm sure all kids, wherever they're from, sneak past cemeteries for fear of attracting the attention of the ghosts.

PS 'Haint blue' is new to me. I figured out it must be a corruption of 'haunt' but had no idea of the history, which I have now looked up. Thank you.

Thank you for sharing the some of the southern lore. We all have legends and beliefs of families and regions.

Nice haibun, Margaret. Where we lived north before moving west (both of Houston) a lot of folks painted their "porches with ceilings of haint blue..." That was to keep the insects, especially spiders, things that hang around a lake area, away. It also was supposed to keep birds off the balcony railings. Our painter used chemicals mixed with the paint.
None, Midwest, Nebraska, North, New Hampshire, nor South, Texas, have I heard of holding ones breath when passing cemeteries. I do hold my breath while passing through a smoking area.
..

I enjoyed this one Margaret!💝 There are countless superstitions, myths and tales around the world which I believe occur from experiences one cannot fully explain and vice versa. Especially like; "They say the Devil's beguiled by his own handsome face, mirrors hang upon southern porches."

Glad you added the note. I didnt know the significance of "holding the breath"

Happy you dropped by my blog

Oh, I love this. There are such legends and mysteries people hold in the south. Porch ceiling are painted blue in many places here to confuse wasps and other nesting insects. They see it as sky.

You are a talented writer and artist! I hope you know how much I enjoy your posts.

How delightfully you've drawn the tales together to trap the devil! I did not "hold my breath" passing cemeteries, but I still act on the belief that I must say "God Bless You" for a sneeze so the Devil cannot creep in while the soul is out for air.